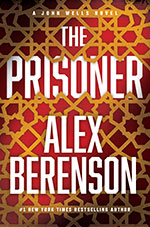 In the wake of a failed mission in Syria, John Wells and his old boss Ellis Shafer realize the unthinkable has come to pass.  An officer at the CIA's highest levels is betraying the agency to the Islamic State.

But the CIA's new director dismisses their accusation as impossible.  Even Vinny Duto, now the President, discounts it.  To prove it, Wells will have to convince an ISIS commander being held at a secret prison in Bulgaria to give up clues to the traitor's identity.  The commander is as canny as he is cruel.  To outsmart him, Wells must go deep undercover as a jihadi - just as he did inside al Qaeda so many years before.

Meanwhile, the traitor and his Islamic State allies are working to unleash an attack that will plunge the world into a bloody ground war with ISIS.  Only Wells and Shafer can stop it.

The Prisoner is the Wells novel readers have craved, taking Wells back to his roots undercover - while bringing him to the forefront of the new fight against Islamic terror.