Berenson´s (The Faithful Spy ) latest ingeniously plotted and fast-paced story again offers superspy John Wells, who is called upon by shifty CIA superiors to investigate the systematic murders of members of a now-disbanded supersecret interrogation team known as the Midnight House. Our well-equipped hero deduces that both the dead interrogators and agency executives harbored an extraordinarily dangerous political secret as well as participated in various forms of financial corruption.
The story features emotionally affecting and high-action scenes in vividly portrayed settings; memorable characters contribute to the reader´s comprehension of how the CIA´s overseas “rendition” program may have been of enormous benefit to national security but also grossly immoral and personally destructive to its participants, terror suspects and interrogators alike.
VERDICT
Arguably Berenson´s best thriller yet, this outstanding novel stands on the top rung of commercial spy fiction. 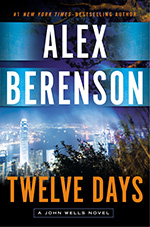